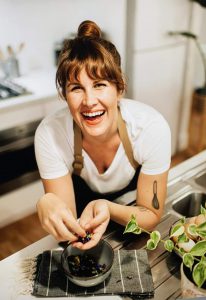 Chef Ellie Schultze grew up in St. Augustine, FL and has recently returned to her hometown to open Vilano Main Street Diner. The restaurant is a modern take on the classic Florida diner. Focusing on a farm to table approach, with from-scratch recipes using local ingredients whenever possible, making their own seasonal jams and signature datil hot sauce.

She creates comfort food that is both innovative and familiar. Her food is influenced by her southern roots, cuisines from her travels, and the culinary techniques of her fine dining experience in NYC.

After graduating with honors from the University of Central Florida with a dual degree in Business and Art, Ellie worked as a server and bartender in Key West saving up money to explore the world. She spent most of her 20’s traveling as much as possible while working in hospitality, making it to over 50 countries. Ellie was able to take cooking courses in countries like Nicaragua, Mexico, Indonesia, China, Thailand, Vietnam, and Cambodia. International travel actually inspired her to head back to school for cooking.

She chose to attend the Natural Gourmet Institute in NYC, where she not only was trained in classic cooking techniques, but focused on healthy dietary alternatives like vegetarian, gluten free, and ayurvedic philosophies. After graduating, Ellie cut her teeth working under top chefs like April Bloomfield, cooking seafood at the John Dory Oyster Bar, and Jean-Georges, working her way up the ranks at the Mercer Kitchen.

In 2014, she became an Executive Chef at Boilermaker, where she helped open the Cocktail Kingdom flagship bar alongside Chef Miguel Trinidad. That mentorship turned into a continued partnership with his company, 99th floor, where she worked on a line of chef inspired candies.

Chef Schultze eventually made a transition into the frozen dessert realm. She became the Head of Research and Development at Van Leeuwen Ice Cream, where she developed and commercialized over 100 unique flavors for their ice cream shops. You can find many of her recipes sold in pints around the country in Whole Foods and other regional markets.

But, when the opportunity to open a restaurant in St. Augustine presented itself, she jumped at the chance! Chef Ellie is ready to join the culinary greats of her foodie driven hometown and is looking forward to serving you and her community.

Charitable donations can be made directly to our Official Charity Partner, Vilano Beach Main Street, a 505(c)3 non-profit organization: