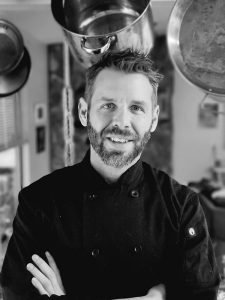 Matthew Brown was born and raised in Thomasville, Georgia. As a young child he found himself with two hardworking military parents and a love for food. He found his culinary roots in Jacksonville Florida. He received his ﬁrst Head Chef position at Stonewood Grill and Tavern at the early age of 23 and then moved on to learn under the guidance of the acclaimed executive Chef Ted Peters at One Ocean Resort in Atlantic Beach, Florida. In 2013 Matthew was hired on as Sous Chef for Collage restaurant in St. Augustine, Fl. Shortly after being hired he was promoted to Executive Chef. In 2016 he was promoted to dual Executive Chef of both sister restaurants – Collage and Blackﬂy Restaurants. In his ﬁrst year as Executive chef, Collage Restaurant was awarded “top 100 restaurants in the nation” to dine by Open Table.com. In the following years Collage received the same award by Yelp, TripAdvisor and three more top 100’s by OpenTable.com. In his last month at Collage restaurant, Food and Wine Magazine published another top 100 list- this time it was 7th best restaurant in the entire nation for ﬁne dining.

Matthew Brown has since moved on from Collage and Blackﬂy Restaurants to open a new dining concept, “Leña”. In collaboration with the award winning-Argentinian-grill maker-Nick Carrera from Urban Asado. Leña is a boundaryless journey originating from the heart of the Argentinian Asado – represented and executed in completely new ways. Using traditional and new inspiring cooking techniques cooked completely using only live ﬁre, each dinner is carefully crafted in a one of a kind custom build mobile kitchen with the ability to host a completely autonomous and seriously elevated dining experience anywhere.