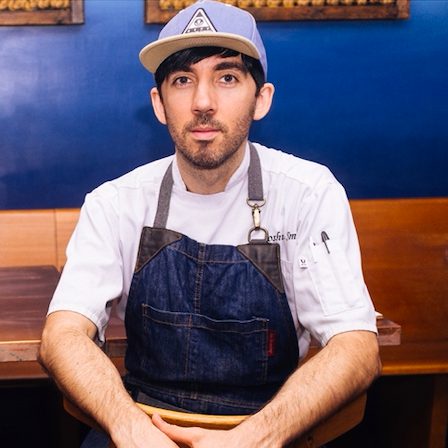 Illinois born, Joshua began cooking professionally as a teenager and then moved  to St. Augustine, FL in 2003, cooking and managing at a local beach side restaurant. He then attended Culinary School back in Illinois, and completed the “Chef Apprenticeship” through the American Culinary Federation in 2006. He has worked at some of St. Augustine’s and Chicago’s best restaurants since: upscale, fine dining, vegetarian, French, gastro pubs, bakeries (pastry chef) and catering.  Most notably, he was hired as Executive Chef at The Ice Plant before they opened in 2013, helping build the first farm-to-table gastro bar in St. Augustine.  Joshua received great press through local and national magazines, newspaper, YouTube, social media and TV.  He filmed an episode of “The Grill Iron” at The Ice Plant that appeared on the Cooking Channel, and the entire first season was nominated for a James Beard award (2014). He built lasting relationships/friendships with over a dozen local farmers, seafood suppliers and artisans to acquire the best possible ingredients for the restaurant.

He accepted the Executive Chef position at Catch 27 restaurant in 2015, hired to run the new kitchen and rebuild the menu. @freshcatch27 slowly grew their local farmer/vendor list from 1 to 31 in just under 2 years.  The farm-to-table eclectic seafood menu uses Florida (the 27th state) ingredients whenever possible, putting the main focus on the freshest-possible local seafood, meats, grains, dairy, vegetables, fruits and herbs.