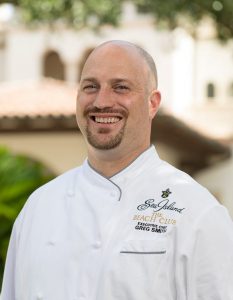 Greg found a personal connection to gastronomic culture from a young age, but it was not until age 23 that he decided to pursue a career as a Chef. Greg graduated from the prestigious Art Institute of California—Los Angeles in 2003, with a degree in Culinary Arts.

Following graduation, Greg’s culinary career began to take off; he received a prime opportunity to become part of Neiman Marcus Beverly Hills’ fine dining restaurant. As a newly trained Chef, with local ingredients at his fingertips, Greg became fascinated with California cuisine and the art of fresh, bold, and spicy flavors as a base for his work. Following Neiman Marcus, he went on to become a Banquet cook at Four Seasons Los Angeles, Beverly Hills and Banquet Sous Chef for The Peninsula Beverly Hills.

Interested in learning more about East Coast cuisine and culture, Chef Greg left Los Angeles and accepted a position with The Ritz-Carlton, Westchester, where he became part of the in-house team at BLT Steak. He took on a variety of other positions in Banquets at the Westchester property and spent time working at The Ritz-Carlton, San Juan. Greg became fascinated with the Caribbean’s cultural landscape and local, flavorful cuisine, aspects that still inspire him today as a Chef in Nevis.

Before coming to Sea Island, Greg Smith worked as the Executive Banquet Chef at The Ojai Valley Inn, Omni La Costa, and Banquet Sous Chef at The Four Seasons Nevis. His number one priority is serving as a mentor and coach to the younger staff he manages. He believes when passion is within the person cooking the meal, great results will follow.